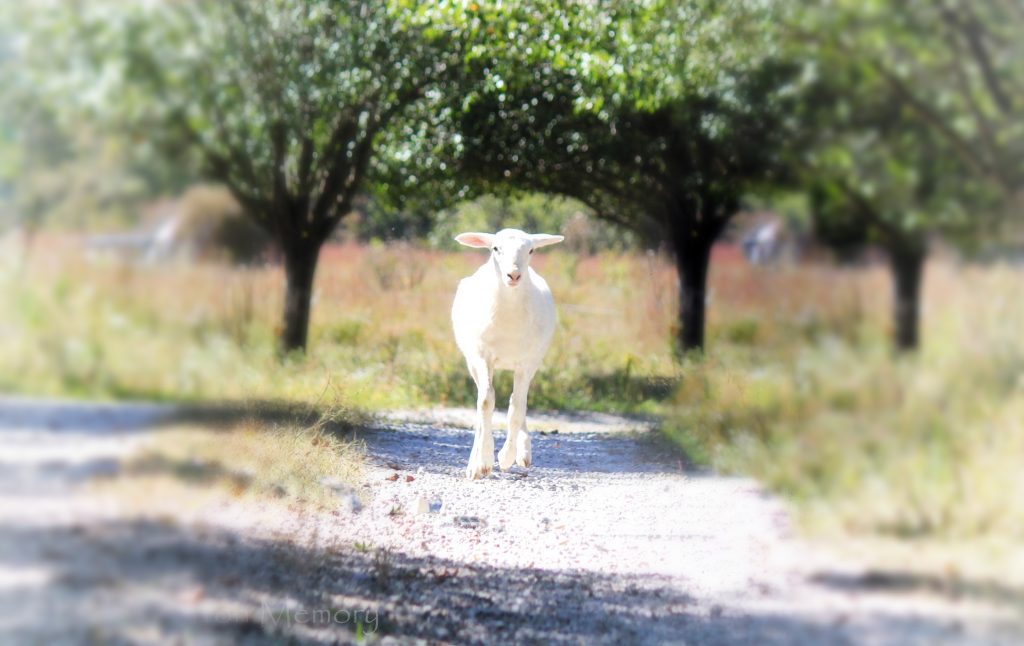 The old man, he sat on the front porch in the heat of the day, turning his head right, squinting his eyes in the high noon sun westward down the long dusty road. A hot day in the south can be awfully unforgiving.

After he had assured himself no one was coming down the road, he turned his head left, peering closing down the eastward dusty road. There weren’t many trees along this stretch of the road – until you came to the old man’s yard and the borders of his fields.

Satisfying himself, there wasn’t anyone on the road, he sighed, picked up a glass of sweet ice tea. There’s nothing like a glass of ice-cold tea on a hot afternoon to cool a body from the head, down the throat. . . nothing.

The old man continued sitting . . . and watching. There wasn’t much else to do, not like today. I don’t know what the old man thought about – maybe he talked to God inside himself. Maybe he thought about his regrets, his misdeeds, dreams that never came to life.

Maybe he saw a rabbit hare off through a blueberry bush, trying to get away from the antics of a frolicsome pup – and thought later how he’d tell his wife about it.

The old man, he didn’t sit as though bored, tapping his foot in a hurry-up way or huffing a what-can-I-do-fun attitude. He sat with calm, pregnant anticipation, a hopeful expectation. Maybe his nephew coming to visit? Maybe a neighbor’s children coming to see the new baby lambs? An old friend with which to share the heat of the afternoon? Maybe someone to haggle with over seed, hay, sheep, chickens and cows?

After his long drink, he shut his eyes for a minute, savoring the fluid coolness. With a quiet, drawn-out “AAAhhhhh,” he opened his eyes and began once again his vigil of looking west, then east. As the sun reached its pinnacle, he took another long draught, closed his eyes for a moment, savored the coolness of the tea – and opened his eyes.

He bound off the porch, joy breaking across his face in a wide smile, welcome outstretched in a hearty handshake.

“Come! Come! Rest a while in the shade,” he said. “Let me get you some cool, sweet tea and something to eat to give you strength. This mid-day heat sure is a scorcher today.”

The men probably hemmed and hawed about how they didn’t want to put him out, but the old man pressed them, “I want to do this for you now that you have journeyed by my place.”

To you and me, the old man might seem desperate, too desperate, for company. It might have been off-putting – and maybe you and I would have not gone beyond the gate, been wary of accepting a glass of water or tea from this old man. To the old man, this was the tradition of his father, his grandfather and his grandfather’s father. Many people had abandoned this tradition of hospitality, but he had not. Possibly many travelers didn’t understand this generous hospitality, maybe mistrusted it.

The three men accepted his invitation, walking through the gate the old man had opened for them and settled into the comfortable porch chairs, the shade giving cool respite.

The old man opened the screen door and disappeared into the depths of the house, returning a short time later with a tray holding glasses and a large pitcher of water. There were three bowls, one for each guest, filled with freshly picked blueberries, blackberries and raspberries to stay their hunger until supper could be brought out. He’d told his wife to make sure she prepared the best steaks, the most golden buttery potatoes spiced just right, savory green beans – and her angel biscuits cooked to perfection. Nothing was to be spared for the weary travelers.

His wife didn’t rail at him, berating him for this last-minute meal with these last minute guests that she didn’t know from Adam. She didn’t begrudge the extra work, sharing the best food they had, or the time spent preparing the meal because it was a way of life for them. She’d gotten used to unexpected guests. She’d been trained as a child for moments like these. She’d been taught that hospitality prepared with a generosity of gift blessed the food and the time. Begrudging was a spice that spoiled the gift. Not all her neighbors continued this tradition of hospitality. It was a tradition started long ago in the long, hot stretch of road – to give travelers a meal and rest in the heat of the day, to refresh them to continue on their journey until evening came.

While the old man’s wife prepared their meal, he brought around from the well two white tin basins filled with water so they could soak their feet. The three men removed their shoes, leaned back and soaked their feet, relaxing as the soreness ebbed.

“No,” he said. “No, I don’t have any children,” he responded probably to the questions about his family, a brief shadow of disappointment crossing his face, giving hint to the sorrow at a dream unfilfilled.

Midday ebbed into mid-afternoon. The great oak tree’s shadow grew longer. Supper was served. A satisfying supper it was, too. Some might consider it a feast. A quiet contentment stirred in those sitting on the porch. The conversations were quieter.

One of the men asked the old man, “Where is your wife?”

“In the kitchen,” the old man answered, suspecting that she was probably now sitting near the window listening to their conversation.

The three men put their shoes on, stood up, readying themselves to continue their journey.

The old man stood with them to walk with them to the gate. One of the men grasped his outstretched  hand, “I will surely return to you about this time next year. Your wife will have a son.”

The traveler’s strong grip kept the old man from falling. Who is this traveler, he thought to himself.

The old man’s wife was listening inside the house. “I’m an old woman,” she thought to herself. “Too old for a young woman’s dreams to come true.” She laughed a bitter-sweet laugh. Old as she was, too late as it was, the idea of the joy of having a baby of her own was a dream that still stirred in her heart. Does a heart ever really give up on dreams? Or does a logical head bury them, hiding the dreams voice from surfacing?

One of the men revealed himself then as the God the old man had told them about, when he heard the old woman’s bittersweet laugh, “Why did you laugh old woman? Why did you say, ‘Will I really have a baby, now that I am old?’ Is anything to hard for me? I will return to you at the appointed time next year. You will have a son.”

The Lord looked straight at her, knowing her heart and her secrets, “Yes, you laughed.”

Would the old man and the old woman have been blessed with a son if they hadn’t hearts of hospitality for those they didn’t know? If the old man, Abraham, hadn’t invited them to eat of the best he had, with a heart free of grudging of time, effort and product, would God have given them their heart’s desire – a son? Would God have made him the father of a nation if Abraham had not extended such gracious, welcoming hospitality? (storyline from Genesis 18:1-16)

Generous, heart-outstretched hospitality in the everyday ordinary – God blesses us when we serve with generous, welcoming, heart-felt kindness like the old man did, like Abraham did.

God has a history of blessing those who welcome him unawares with a generosity of spirit. Before Peter was invited to become a fisher of men, he invited Jesus to his house (Luke 4:38). His mother-in-law wasn’t well. No one was prepared for company. Food stock might have even been running low. Yet, Peter invited Jesus anyway. While there, Jesus healed his mother-in-law, and then stayed to eat with them. Imagine that conversation. Peter is known for his bold questions and conversation. Before Jesus called Peter, according to Luke, they sat around the table eating an everyday ordinary meal. Maybe it was kinneret sardines with bread, something as simple as our tuna sandwich. God doesn’t expect us to prepare meals fit for a king. He expects only the best of what we have in our cupboards. He wants willing hearts not grudging giving of the our time, our resources or our energy. If Peter hadn’t been willing to make room for one more at his supper table on a regular everyday night when there was sickness in the house, just maybe the opportunity to be called a fisher of men might not have occurred. Peter did ask Jesus into his home, to sit at his table – and a day or two later, Jesus asked him to become a fisher of men.

Arms-wide-open hospitality is what God calls us to. Unabashed hospitality! No matter your social standing. No matter your financial condition. No matter whether you’re prepared or not! God just wants a heart waiting with expectation to sit down with whoever he sends to your gate, to your door, or to your kitchen.

God blesses those who love one another as he has loved them. Two men, on the Emmaus Road, deep in conversation, were caught up in their own grief of their savior crucified. If they hadn’t made room for one more, not only in their walk but at their roadside table, what would they have missed? Instead of dismissing a stranger walking near them, dismissing him because they didn’t know him or their story, these two men invited him with hearts wide open into their conversation. Then, like Abraham, they urged the stranger to remain in their company and eat with them. . . . they urged him, meaning they didn’t give up when the stranger expressed, “I don’t want to intrude. You have only enough for your journey – not for a stranger, too.” They urged him, pressed him, tried to get beneath codes of etiquette to establish sincerity in the invitation. This stranger wasn’t part of their community, their intimate group, an insider. Their sincerity, their determination convinced the stranger, who after being urged with a generosity of spirit, acquiesced.

This stranger, “when he was at the table with them, he took bread, gave thanks, broke it and began to give it to them. Then their eyes were opened and they recognized him, and he disappeared from their sight” ~ Luke 23: 30-31

What would they have missed, if they hadn’t welcomed a stranger into their conversation, into their meal, pressing him with a hospitality filled with a generosity of spirit that gave truth to their invitation. They would have missed seeing the newly resurrected Jesus Christ.

Feed my sheep! Sons and daughters of the father, live making room for one more in the everyday ordinary

Every day, look to the east and west, the north and south, look with joyful expectation for God to send someone. Invite unashamed God’s sheep and lambs to your table. Sit long and talk much. I imagine in the shade of Abraham’s tent, in Peter’s house, on the Emmaus Road, there was a lot of time to sit or walk long and talk much. Sitting long and talking much is a seed planting and watering time. Sometimes the conversations are directly about things of God. Sometimes the conversations are nothing about God but the spirit of God plants seed from the discussion. Sometimes it is just God seeing if we will welcome his blessing.

Click below for the rest  of the posts in this series: