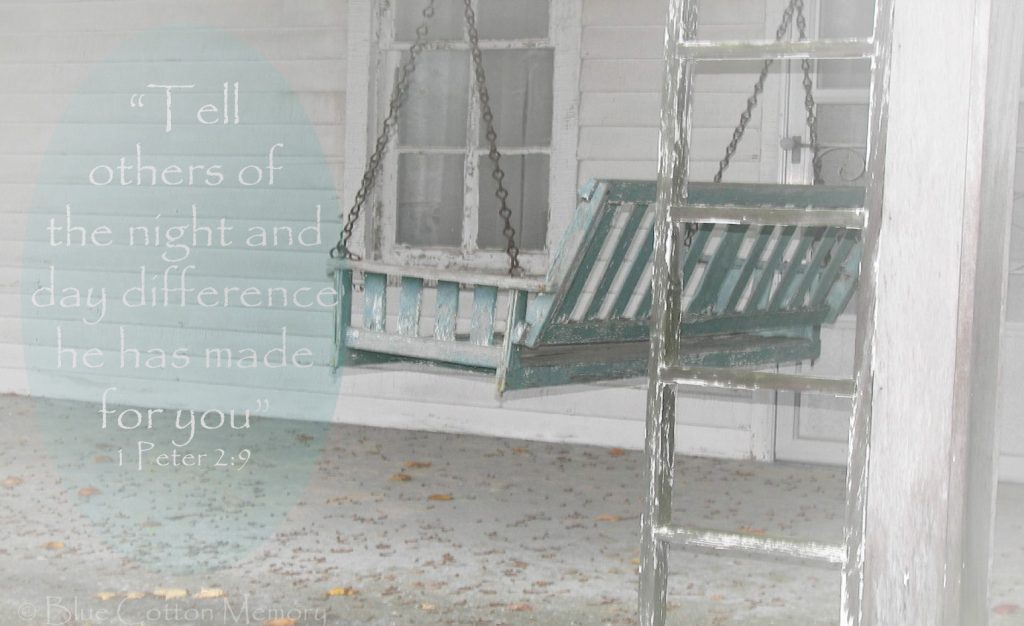 One morning, when the sun spilled through the front window’s of my grandmother’s house – something happened between the drinking of hot cocoa at her kitchen table and my sockless feet pushing off the porch floor propelling me high and low on my grandmother’s swing.

My “Can-I-stay-here-forever” wish which every child asks when it’s time to leave their grandparent’s house – and which should always be answered with a gentle, hug-filled, “No” – garnered a yes. My mother said, “Yes” over the phone, in the morning light slipping boldly across the upstairs hallway as Grandmother and I made beds. Yes, because of a broken marriage.

Radical divorce planted a seed dream in my heart – a dream to grow up and have a “normal” family – to become what I perceived was an everyman life – 2 parents loving each other, raising children in security, love and faith who grow with support to reach their dreams, butterfly-kiss families.

Radical meaning “favoring or tending to produce extreme or fundamental changes in political, economic, or social conditions, institutions, habits of mind; someone who demands substantial or extreme changes in the existing system.”

God was in this everyman dream of mine – conventional, traditional – rooted all the way back to Abraham and Sarah, to Adam and Eve.

The Soul is always trying to get back to the Father; Only in Him does the soul find rest, recognize the normal state God created him/her for. The soul wants to be found, wants to be at home, wants to be accepted at His family table. The soul yearns for God-normal and God-ordinary.

As I grew in living and grew in faith, I met other children of the Father . One young man had scripture tattooed over his arms, legs, back, chest.  He wanted to capture the attention of the outsider, he said. Radical reaching.

I have been struggling with my everyman dream lately – that trying to live God-ordinary is not enough.

Suddenly, faith had become radical, and I was asking God for an ordinary dream.

Had my non-radical dreams been like a balloon weight keeping me from soaring high? Had I dreamed too small, too low? Limited God’s purpose for my life?

And that, my friend, was a deception of a radical snake that entered a normal garden that was Eden at one time. The devil was playing semantic games with my faith.

One noon-time, my oldest son walked up the porch steps, prowled around the kitchen for lunch while I sat in the rocking chair grading college essays. He had popped over from the university.

“Do you know,” he said. “We’re a peculiar family. Not all families are like us.”

“Ummm – yeah – we’re called to be a peculiar people,” I countered, deliberately mis-translating his intent. Apparently, he had just discovered not all families were like ours. I don’t know whether he found out other parents didn’t give their kids Payne’s Common Sense and stockings full of C.S. Lewis before Narnia was made into blockbuster movies. I don’t know if he found out other families didn’t talk about the Senate, the House, the Legislative Branch and decisions affecting our families. Maybe not all families believe in laying on of hands for healing. The conversation never went down that road.

“But you are a chosen generation, a royal priesthood, an holy nation, a peculiar people; that you should show forth the praises of him who has called you out of darkness into his marvelous light” (1 Peter 2:9)

Maybe we are a peculiar family. If peculiarity meant different, not the status quo defined in the media – well, maybe my everyman dream was more radical then I realized.

. . . .Maybe an everyman dream produces radical results in a world that is not God-normal.

“How can you stand to come here everyday,” a fellow worker moaned.

“It’s a good job. There are worse jobs. Maybe I don’t use all my gifts, all myself but it’s a good job,” I answered. “I believe in blooming where I’m planted.”

“I don’t want to bloom here,” she laughed.

Yet, even in the hard ground, even the ground we see as uncomfortable, we are to reach for Him, find His blessings and in the reaching and finding, we bloom where we are planted.

Radical: “Implanted by nature; In botany, proceeding immediately from the root; pertaining to the root or origin; original, fundamental; as a radical truth” (Noah Webster, 1828 dictionary).

Blooming where I am planted is radical living, radical faith when the root is the Father – and that root is where normal lives.

Maybe there is something radical about the ordinary everyman dream – something beautifully radical growing and blooming. Something that shouldn’t be diminished or discounted. Something that maybe doesn’t soar but blooms riotously.

Maybe an everyman dream produces radical results in a world that is not God-normal.