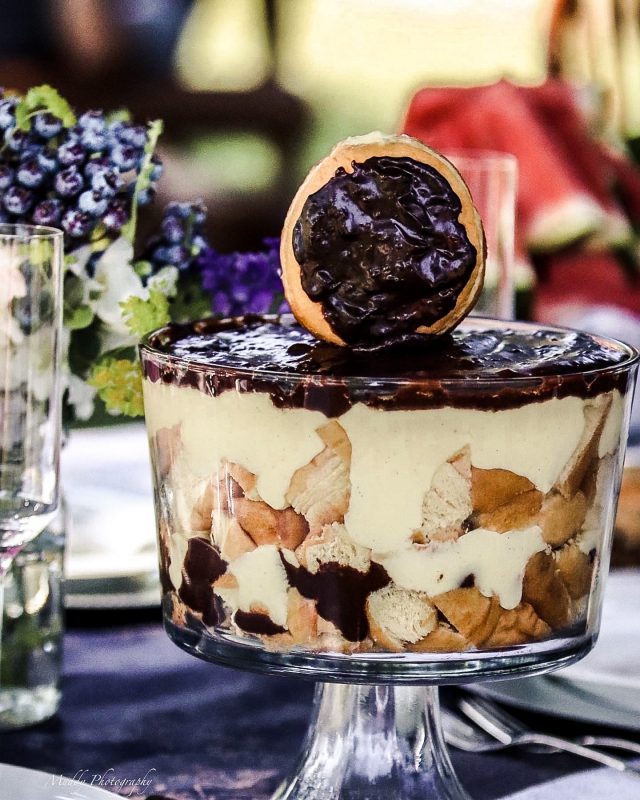 June is our family’s Big Birthday month. We celebrate with one Big Party. One reason it’s my favorite celebration of the year is because the setting is outside. When they’re all outside – the boys and their girls, the grands – no one cares so much about the noise. The little ones’ energy doesn’t seem so big in outdoor spaces, and, maybe most importantly, with the cornhole and the impromptu wrestling or foot races, all these boys are more likely to linger longer. We don’t go from full plates straight to dessert. There’s fun and games and space to be exuberant in between. . . . a mama likes it when her family lingers.

One son likes Baklava. Another asked for a Shaker Lemon Pie. The little ones get a specially designed Muddy Cake. I asked one son, the one who married less than a month ago what he wanted. “Bavarian Cream Donuts from Ralphs,” he said. Since I don’t make donuts, and their birthday dessert needs to me Mom (or Muddy) made, we discussed Bavarian Cream Pies – and then a few days later, as I ruminated over what to do, I visualized a Bavarian Cream Donut Trifle.

My mind went back to the Tiramisu Trifle my aunt taught me to make years ago that used Sara Lee Pound cake. If Aunt Joyce used Sara Lee Pound cake instead of making it from scratch herself, then maybe, just maybe, I could, create a dessert to make my son smile. My mind swirled with thoughts about donuts, scratch-baking, and pride. I finally decided that I shouldn’t let pride get in the way of a good idea, so I called the donut shop. “Yes,” they said to my query. I could buy a dozen Bavarian cream-filled donuts without the cream center and the chocolate dipped exterior.

I was determined, though, to make the Bavarian cream from scratch. Research of the original Bavarian cream was disheartening. Authentic Bavarian cream is made with gelatin. One source said it should be firm and able to stand on its own outside the mold. The filling of our local donut shop’s Bavarian cream donut wasn’t like that at all. I also knew my son wouldn’t like the texture from the authentic recipe.

Still stirring through thoughts and ideas, I took a couple of the little grands to the donut shop one afternoon. Sitting on the stools around the counter, they slurped their carton milk. One ate a powdered donut and the other a sprinkle donut while I studied the Bavarian cream-filled donut.

My pride wrestled with itself again. To make the cream filling from scratch? Or from a box?

. . . in all the wondering, puzzling over pride and recipes, I remembered Nanny’s Banana Pudding. Everyone loved Nanny’s Banana Pudding. It’s my husband’s favorite – and a favorite of all the boys. One time when she came to visit, she wanted to make banana pudding for my husband. I got out a pan to make it from scratch – and she said, “No – you just need to pick up a box of Jell-O pudding.” I returned from the store with the Jell-O Stove-Top Vanilla Pudding. . . because stove-top is almost like homemade. . . right? Nanny said I didn’t need to work that hard. I learned in that moment that some short-cuts taste like Nanny’s love. I’ve made her Banana Pudding ever since. Nanny’s pudding tasted exactly like the Bavarian cream filling I was eating in the donut shop beside my grandsons. I thought this recipe just might need Nanny’s special touch.

One of the things I love about this recipe is all the threads lead back to people and places loved – my aunt, Nanny, even the donut shop where we take the grands on Friday afternoon school days.

There’s a place for from-scratch recipes – and a place for non-scratch solutions. Pride risks ruining outcomes – whether it’s a building project, a garden project, a science fair project, a birthday dessert project. Pride steps in front of the intended result, blindspotting my heart so I no longer work toward the original, intended goal. I start making decisions to please Pride’s set of criteria instead of the project pleasing the one it was designed for. It sounds like Pride wanting to hijack my heart’s intent. No, love sometimes doesn’t do it Pride’s way. It does it Loves way. . . and that’s a good thing!

“Do nothing out of selfish ambition or empty pride,
but in humility consider others more important
than yourselves.”
~ Philippians 2:3

Bavarian Cream Mixture:
Empty the vanilla pudding mix into a bowl. Pour in 3 cups Heavy Whipping Cream and 3 Cups milk. Slice open and scrape the vanilla bean, adding all the scrapings to the pudding mixture. When thickened, set aside. Set aside 1/4 cup to fill the set-aside donut.

Donuts:
Set aside one donut for trifle topping, but cut the 11 other donuts into bite-sized pieces.

Putting Together the Trifle:
Layer 1:
Layer the bottom of the trifle bowl with half of the bite-sized cut-up pieces of the donuts.
Drizzle some chocolate ganache over the donuts (does not need to be comprehensive – just a drizzling).
Spoon 1/3 to 1/2 pudding on top of the ganache and donuts.
Layer 2:
Place the rest of the donut pieces over the vanilla pudding.
Spoon 1/3 to remaining half of pudding onto donut pieces (depending on size of trifle bowl)
Cover pudding layer with remaining chocolate ganache (Keep a tablespoon out for the remaining whole donut)
Fill the remaining whole donut with filling and spread the set-aside chocolate ganache over one side. Use it to top the Bavarian Cream Donut Trifle.
Refrigerate overnight or serve fresh.