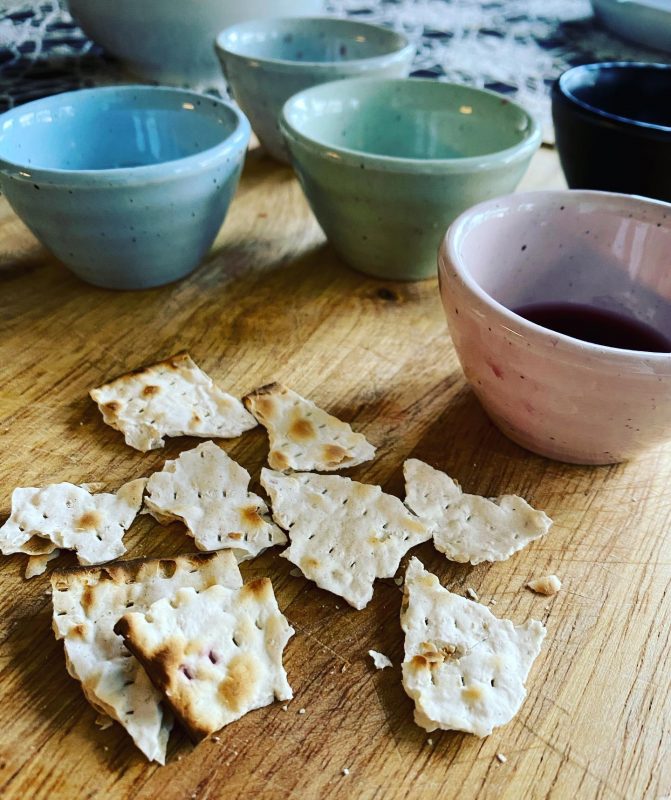 “And he took bread, and when he had given thanks, he broke it and gave it to them, saying, ‘This is my body, which is given for you. Do this in remembrance of me’” (Luke 22:19).

A college speech instructor asked my son’s class to name three people who have influenced him. He listed Jesus, Peter and David.  I would have listed my grandmother, who taught me to stand up for what I believe, St. Therese of Lisieux, from whom I learned about an alive relationship with God, and Pastor Eddie Turner, who taught about the power of the holy spirit, speaking faith, who I am to God,  Jesus pursuing and saving the broken sinner.

Who would you have listed?

I bet it wouldn’t have been Judas Iscariot. I doubt he would be found on any list. Yet, possibly, from him we can learn the powerful difference of grace over law – of exactly what Jesus’s crucifixion did for you and me and every broken person between and around us.

Yet, when I study the story of Judas and Peter, I understand more what Jesus saved me from. I need that understanding to better give thanks as I remember what Jesus did for me. The difference between the two is the difference between how we survive our sin, how we are resurrected with Christ and restored to the Father. About 2000 years ago, two men betrayed the Messiah. One ended up crushed, broken and dead. The other preached the gospel the rest of his life, dying a martyr’s death for his faith, never failing his Savior again.

Let’s lay out the facts first:

Both had heard the word. Both had walked with the Lord. Both regretted and repented. One died, and one lived.

The first difference is what each did about their sin – their weakness – whether it was pride, fear or greed.

One sought absolution from church leaders. The other sought Christ.

The record of Peter’s story line pauses after his betrayal, weeping and repentance. There is no written record of where he was between the time he wept and resurrection morning. I imagine the grief of his sin equaled Judas’s grief. I imagine he beat himself up for his major fail moment. Haven’t we all had those fail moments? Moments where we betray our hearts, our values, our faith? How can we condemn others when we, too, have failed and sinned?

Peter seemed to not only understand that he was a sinful man, but he understood the need to repent. Peter didn’t seek go-betweens.  The night before the crucifixion, the veil was firmly in place; the law still ruled. No priest interceded for him, and without a priest to intercede for him, there was no absolution.

Peter repented by faith. Just him and Jesus.  By faith, just like Abraham, Noah, Sarah, Moses, Rahab – and the heroes of the bible – by His faith and hope that Christ was the Messiah, before the temple veil was rent from top to bottom when Jesus died and man was no longer separated from God, Peter held on in the darkness of the crucifixion before the resurrection. The burden of his sin must have been overwhelming. After all, the same burden caused Judas to end his life. Yet, the power of faith always proves stronger than the burden of sin.

Have you ever wondered how Peter could have returned to the other ten? How he could take his place – how he could be a rock for Christ’s church? Are you willing to weigh another’s sin? To judge whether one betrayal is worse than another? After all, a betrayer was needed – just as Samson’s sinful behavior was needed to bring down the Philistines (Judges 14:4).

Yet, we find Peter restored to the ten – not meek, not unworthy, not out-cast for his betrayal.

There’s a story I know, of a man who went into basic training in WWII. His sergeant constantly rebuked him as he was trained for  war-time responsibilities. There wasn’t a day, it seems, he wasn’t called into the sergeant’s office for some infraction. Those rebukes stung, yet they had a lasting impact. He told me, “He grew me up. He taught me to be a man. He was a father to me.”

Peter was that way with Jesus.  Peter pushed away Jesus initially, before he was called to be one of the twelve: “”Go away from me, Lord; I am a sinful man!” (Luke 5:8)

And Peter answered him, “Lord, if it is you, command me to come to you on the water.”  He said, “Come.” So Peter got out of the boat and walked on the water and came to Jesus.  But when he saw the wind, he was afraid, and beginning to sink he cried out, “Lord, save me.” Jesus immediately reached out his hand and took hold of him, saying to him, “O you of little faith, why did you doubt?” And when they got into the boat, the wind ceased.  And those in the boat worshiped him, saying, “Truly you are the Son of God” (Matt 14:28-33).

“Simon, stay on your toes. Satan has tried his best to separate all of you from me, like chaff from wheat. Simon, I’ve prayed for you in particular that you not give in or give out. When you have come through the time of testing, turn to your companions and give them a fresh start” (Luke 22: 31-32, The Message).

Peter, so like the World War II soldier, took those rebukes, remembered and learned from them, and held on to them in the darkest of moments.

One man looked to his fellow men for redemption and didn’t find it. Who he looked to led him to death.

The other looked to Jesus, the man who had rebuked him, and in the rebuking, taught him. Who he looked to led him to the resurrection and redemption.

How did one survive the burden of sin and another didn’t? Could it be Peter kept his eyes on Christ, kept his focus, his hope in him, though he yet didn’t see, didn’t understand about crucifixion tearing away the veil (the law) separating us from God?

It was a “Faith-is-the-substance-of-things-hoped-for;-the-evidence-of-things-not-seen”  (Hebrews 11: 1) moment.

One was overwhelmed by the burden of the law; one was redeemed through faith by grace, the burden lifted and born by Christ.

That we sin doesn’t surprise God. We are fallible, and in our fallibility, we are only complete and whole through God.

To truly understand the power and grace of Christ’s crucifixion, we need to understand man’s hopelessness and separation from God by the law.

It isn’t enough to say that Judas betrayed Christ. To most, he is a man defined only as the betrayer – and whose death was a fitting judgement against him.

Yet, God saved killers. God saved thieves. God redeemed selfish men. The stories say so. If we leave Judas in the potter’s field, dismissing him, we fail to truly see the power and depth of what exactly Jesus did for you and me. It might only be a veil’s difference, but when the veil separates us from God – it’s the difference between life and death.

Victor Hugo’s novel Les Miserable is a story of two similar characters – one who represents the law (Judas/Javert) and another who represents Grace (Peter/Jean ValJean). Javert sought salvation through the law. Law breakers were irredeemable, unworthy of God’s grace, of man’s kindness, benevolence and second chances. In the end, Javert realizes he had it all wrong. In a life-changing moment, Javert recognized that God redeems the sinner. The revelation into God’s grace also revealed the wrong he had done to so many people. The realization of the weight of his sin overwhelmed him. He could only feel the soul-killing burden of sin’s weight. Having kept is eyes so long on the law, Javert is unable to set his eyes on his Savior and the forgiveness he so readily offers. Through forgiveness the burden would be released through redemption, all because of Christ’s crucifixion and resurrection. Javert didn’t believe it could be for him – and so he threw himself into the river.

Judas repented without salvation hope; the law was his hope and the men who kept the law denied him forgiveness. He is a living example of sinner’s hopelessness under the law. His hopelessness is even foretold:

“For I must die just as was prophesied, but woe to the man by whom I am betrayed. Far better for that one if he had never been born” (Matthew 26:24).

Under the law, aren’t we all like the Cain crying out:

“Cain said to the Lord, “My punishment is greater than I can bear. Behold, you have driven me today away from the ground, and from your face I shall be hidden” (Genesis 4:13).

What we do know is that Peter pressed forward towards Christ. Peter held on to this truth:

Despite Peter’s betrayal, he was welcomed back in to the group. We don’t know what he did during those hours after his betrayal and resurrection morning, but whatever he did led him back to Christ, to the embrace and acceptance of the fellow apostles.

Jesus’ crucifixion and resurrection gives us a grace over law culture, a redeeming of the soul out of sin culture, a salvation infused with God’s grace culture.

“Don’t be alarmed,” he said. “I know you are looking for Jesus of Nazareth, who was crucified. He is not here—he has been raised! Look, here is the place where he was placed.  Now go and give this message to his disciples, including Peter” (Mark 14: 6-7).

Peter passed the test. He came through – and Jesus was letting him know that he knew, that he was forgiven, that he was part of this new life under grace. “Including Peter”– including you, including me – including all those broken sinners repenting but not believing they are good enough, worthy enough.

A tale of two betrayers – and all the difference a veil makes.

Are you looking to Jesus in your fail moments? Do you you believe God’s grace is for you, too – no matter the weight of your sin?

You have two choices – grace or the law. What do  you choose?

“For God so loved the world, that he gave his only begotten Son, that whosoever believeth in him should not perish, but have everlasting life” (John 3:16)